With today's debut of the Official Madden NFL 23 Trailer, many of us are probably wondering, what is this new gameplay system called "FieldSENSE"? This article will highlight some key features of the new system from EA's FieldSENSE Deep Dive Gridiron Notes. It is important to note the FieldSENSE Gameplay System is only available on the Xbox Series X|S or PlayStation 5 versions of Madden NFL 23.

Are you sick of feeling like pre-determined animations controlled your fate in a game of Madden? Well, in Madden NFL 23, EA has looked to address this by adding over 3,500 new animations to give users more control over every impact, tackle, and collision for more authentic experiences and outcomes. Hit Everything includes the following six key components:

The first component of Hit Everything we will take a look at is "Hit The Pile", which is an animation-selection system meant to deliver more authentic pile outcomes and animations to Madden NFL 23. This new system accounts for factors such as the players involved in the pile and the impact being exerted on the pile by those involved.

In years past, we have seen a penalty for adding defenders to a pile that actually allowed a ball carrier to break free easier. As long as this isn't present in M23, Hit The Pile seems like a welcome improvement. 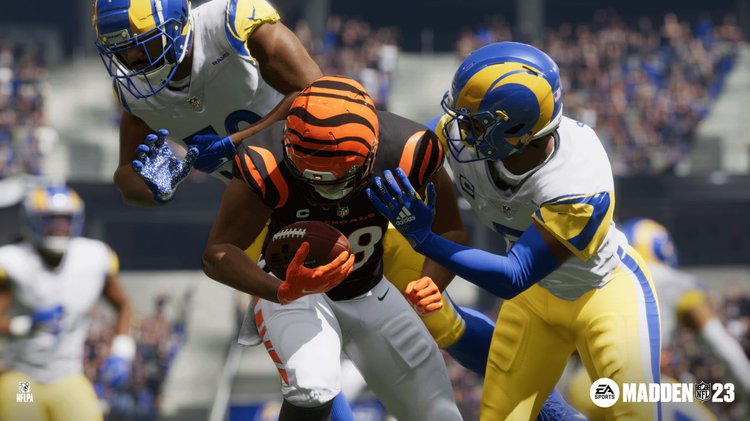 The next component of Hit Everything we take a look at is Stand-Up Tackles. In Madden 23, defenders making a tackle and ball carriers looking to break a tackle will enter a button-mashing battle to determine a winner, with size and ratings factoring into the equation.

Ball carriers engaged in this battle have a chance at breaking the tackle, but also increase their chance of fumbling. Extra defenders arriving at the pile can lay a hit stick or attempt to strip the ball to create a turnover. Ball carriers can choose to protect the ball or give themselves up and concede the tackle to help avoid fumbling.

Similar to Stand-Up Tackles, Madden NFL 23 will allow users to interact with blocking situations. Simply use the hit stick as a defender to blow up the block and create a pile. Force your way through or around the pile to reach the QB or ball carrier. 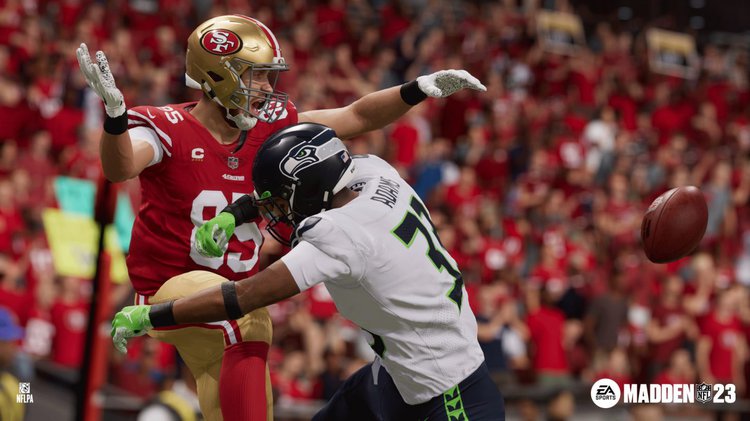 Hit Everything isn't just for defense! In M23, you will notice RBs and TEs working their way through traffic at the line to run their route or assisting on block-and-release routes. This Add-On Block mechanism applies to all blockers looking to make a chip block within the path of their assignment.

The final component of Hit Everything listed in the Deep Dive is Branching and Physics Tech. Simply put, this tech determines whether a player's momentum and interaction should result in a stumble, fall, or both. Missing a tackle and running into a teammate can now result in a more realistic outcome, as it would in real life.

Skill-Based Passing in M23 is designed to give users more control over each and every pass you throw with an all-new passing meter and reticle. This new system should be especially helpful with back-shoulder throws, precision throws and leading your receiver to the spot YOU want.

To use Skill-Based Passing, press the icon for the intended receiver and then use your left analog stick to aim your pass. It's that simple. 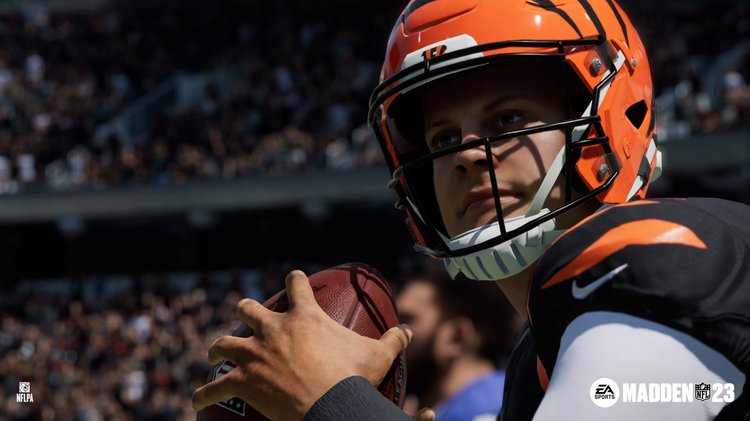 For those of you looking for even more freedom in the passing game, Free-Form Passing lets users move their Target Reticle outside of their Target Area, allowing for even more precision on back-shoulder throws and leads on streaks. Holding LT/L2 will now activate Free-Form Passing, which moves low-ball passes to holding LT/L2 and aiming the left stick down, forcing a throw and catch closer to the ground.

There are 2 different passing meters in M23: Power and Accuracy. The Power meter is activated by selecting "Placement" as your Passing Type under Passing Settings. This meter allows for lobs, bullets, and touch passes, depending on how long you press the button before releasing.

The Accuracy meter gives users the ability to dictate the power of the pass AND the accuracy. The Accuracy meter can be activated by selecting "Placement and Accuracy" as your Passing Type under Passing Settings. With this system, a portion of the meter will now be blue. Release the ball within this blue section of the meter for a guaranteed accurate pass. If you miss the blue section with your release, the pass is not guaranteed to be accurate and is subject to normal factors, such as pressure, ratings, abilities, and throwing on the run vs. set. 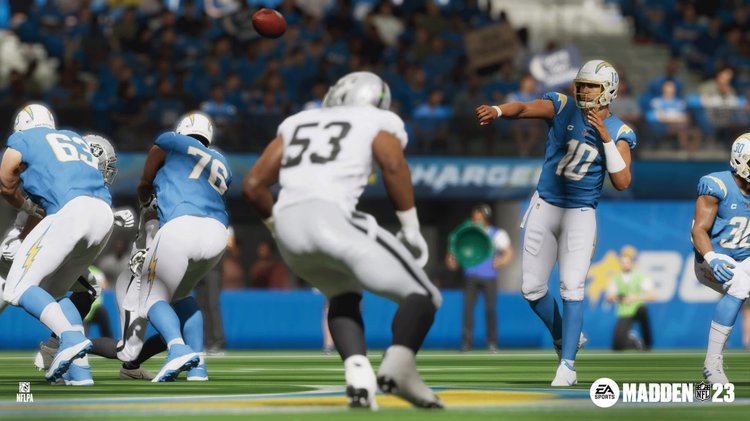 If you're looking to make a precise, hard cut in Madden NFL 23, you will now be able to hold LT/L2 and move your stick within 360 degrees to change directions and cut on a dime when and where you want, resulting in more control. 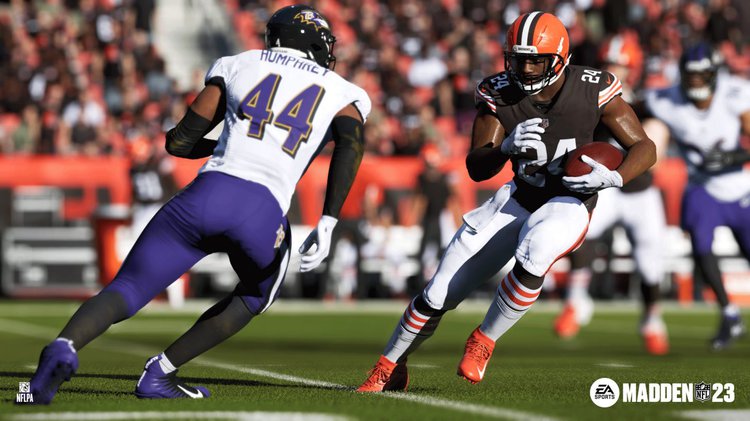 All-new foot fire and hop step release moves have been added to Madden NFL 23, allowing receivers more control over beating a press assignment. Hold LT/L2 and flick the right stick in one of five different directions: 90 degrees left or right, 45 degrees left or right, or straight forward. Moves can be chained together and press factors include ratings, strength, and positioning. Get the defender off center to increase your receiver's chances of beating the press!

New cut moves and fakes allow receivers to fake out defenders in man coverage easier. A defender in man coverage will now be forced to react to cuts and fakes within a reaction window. If they fail to react in time, they will stumble. While sprinting, press LT/L2 and move your left stick to trigger a specific cut animation. 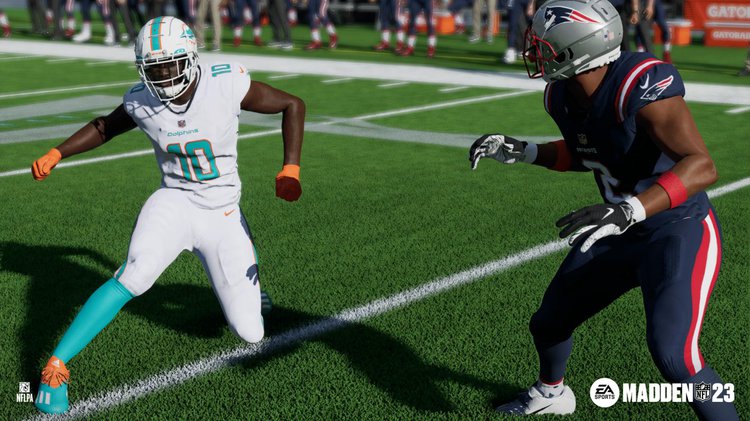 Adjustments have been made to press matchups in Madden NFL 23 to make these engagements more true to real life. Users will now have more control over the direction they force the receiver and their ability to change direction mid-press. Ratings will play a major factor in determining this matchup, but users still have the ability to counter with the right moves!

A new mechanic called "Defensive Evade" now gives defenders more control over their players in the open field to avoid oncoming blockers. Hold RT/R2 and flick the right stick left or right to cover more ground laterally in an attempt to avoid the oncoming block attempt rather than being forced to shed the block before making the tackle.

What are your thoughts on all of the gameplay updates being introduced by FieldSENSE? Let us know in the comments below.