Team of the Week 11 has been released in Madden Ultimate Team 22, featuring LTD Rob Gronkowski, Player of the Week Jonathan Taylor, and Legendary Champions Jimmy Smith (WR) and Jason Taylor. Jonathan Taylor is our first repeat Player of the Week after earning the honors in Week 6 and now, again in Week 11. Taylor recorded 204 total yards and 5 touchdowns en route to a Colts 41-15 win over the Bills, and plenty of fantasy football wins for his team owners as well.

Rob Gronkowski is the Week 11 LTD for his game in 2012 against the Colts that saw him haul in 7 receptions for 137 yards and 2 touchdowns. Jaguars fans will certainly be happy to see legendary WR Jimmy Smith make his return to MUT today. Smith is the Offensive Champion of Week 11 for his big day against the Saints in 1999 when he recorded 9 catches for 220 yards and a touchdown. Jason Taylor is the Week 11 Defensive Champion for a game in 2006 against the Vikings when he logged 1 sack, 2 passes defended, 2 forced fumbles, and 1 interception he returned for a touchdown in the Dolphins narrow 24-20 win.

*Player of the Week and both Champions can be acquired by completing their sets. LTD Rob Gronkowski can be found in packs until 11/25 at 10 AM ET. Players with higher OVR items than their TOTW items in MUT receive +1 OVR to their existing Power Up (Mixon and Jones).

Player of the Week: Jonathan Taylor

Earn 94 OVR Jonathan Taylor and his Power Up by completing his set that requires:

Earn 94 OVR Jimmy Smith and his Power Up by completing his set that requires:

Earn 94 OVR Jason Taylor and his Power Up by completing his set that requires:

Complete the following challenges before they expire on 11/30 at 10:30 AM ET to earn your choice of 1x 90 OVR NCAT TOTW 11 player (Ertz or King II) and a TOTY Token needed for the set that rewards a TOTY player in January (requires 17 of 21 Tokens). 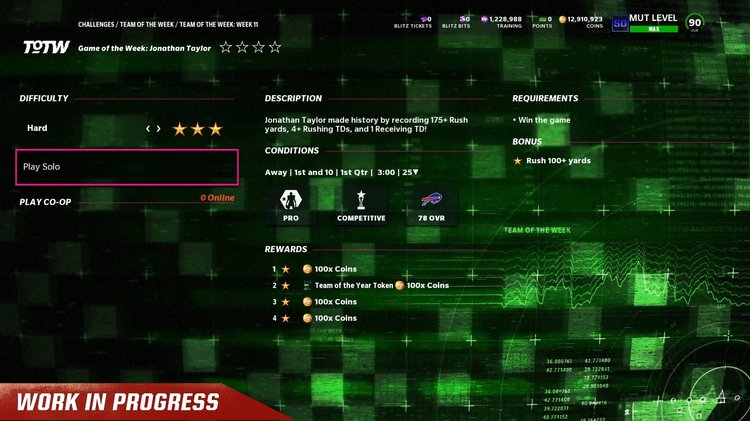 Did EA get the TOTW 11 selections right in your opinion? Let us know your thoughts in the comments below!