There seems to be a lot of confusion surrounding the new Field Pass system in Madden Ultimate Team 23. How do I earn XP? Where are my rewards? Today's article aims to answer those questions and more about MUT 23 Field Passes. Luckily for us, a popular YouTuber who is no stranger to Madden is here to help break it down for us, Popular Stranger! Watch Pop's video below or continue reading for a summary:

Where can I find Field Passes in MUT 23?

Field Passes can be located under the "Play" tab on the main menu of Madden Ultimate Team. It is the tile on the far right of the screen (see image below). 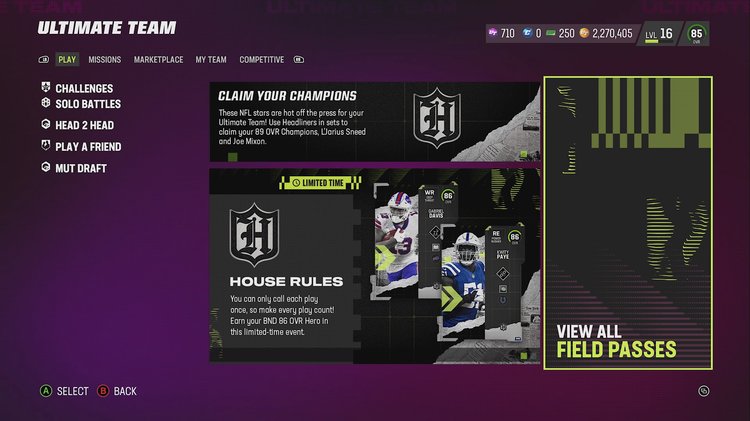 Objectives, objectives, and objectives! In MUT 23, XP needed to increase your level on Field Passes can only be earned by completing objectives, not by simply playing a game or mindlessly kicking field goals as it was in MUT 22. Objectives can be located in each Field Pass, but we'll cover this more for each Pass later in the article.

Where are my Solo Battles, MUT Champions, and Seasons Rewards?

They are found in the Competitive Field Pass. Rewards in MUT 23 are no longer delayed like they were in previous years. Now, as you complete objectives in Solo Battles, MUT Champions, and/or Seasons, you will earn XP that increases your Competitive Level, unlocking new rewards at each tier.

How many different Field Passes are there?

There are 3 different types of Field Passes in MUT 23: Season, Competitive, and Program. Continue reading for more info on each Field Pass. 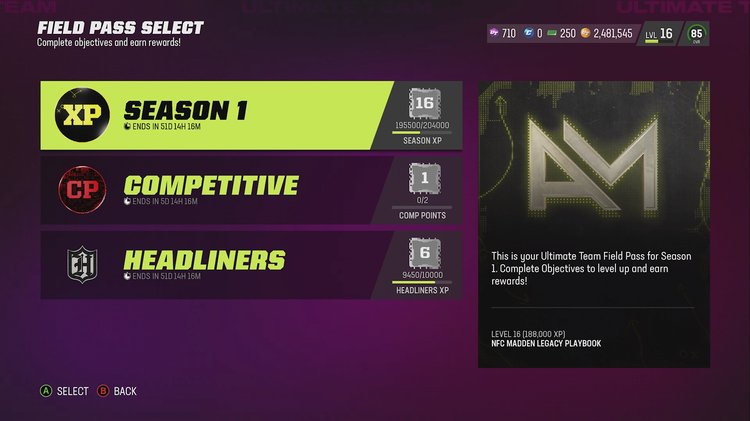 The first Field Pass we take a look at is the Season Field Pass, which lasts approximately 60 days before resetting with the start of the next Season. The first tab in the Season 1 Field Pass is the Rewards tab. This is where you can see all of the possible rewards that can be earned during the current Season (Levels 2 through 61). Rewards in the Season 1 Field Pass include Coins, Strategy Items, Packs, Exclusive Players, and more. Season 1 Reward Players include 83 OVR Miles Sanders, 85 OVR Zach Cunningham, 87 OVR CeeDee Lamb, 89 OVR Stephon Gilmore, and 91 OVR Dave Casper. 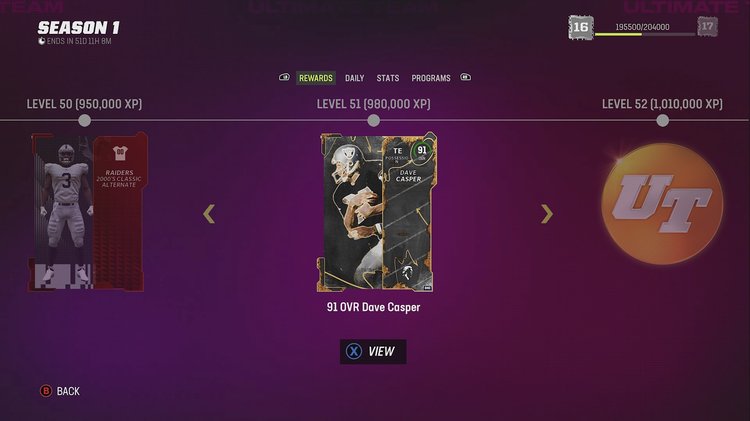 The next tab found in the Season 1 Field Pass is the Daily Objectives tab. Every day during the Season, there are 3 Daily Objectives worth 1,000 Season XP each that you want to complete. Record 200 offensive yards, purchase a pack, and complete a set each day for a total of 3,000 Season XP, a random Strategy Item, and a daily coin pack that includes a Coin Quicksell for a random amount. Completing all daily objectives will reward larger amounts of Season XP as you complete more Dailies during the Season (up to 30 days in Season 1). This will be the easiest way to earn XP throughout the Season, so always try to complete your Daily Objectives!

*If you're looking for tips on the fastest ways to complete Daily Objectives, Pop has a video on that too! 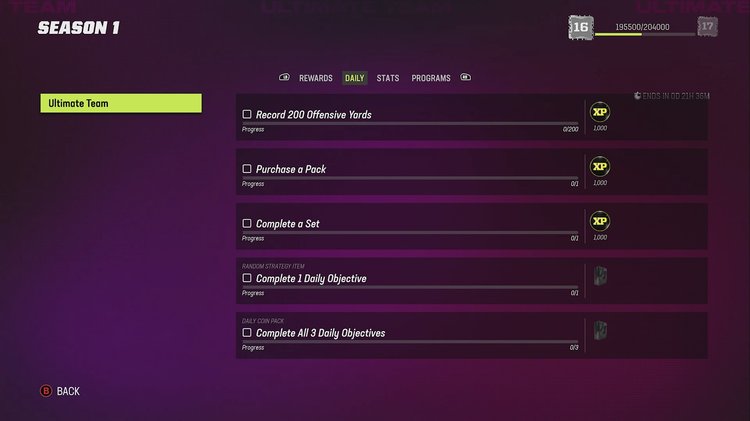 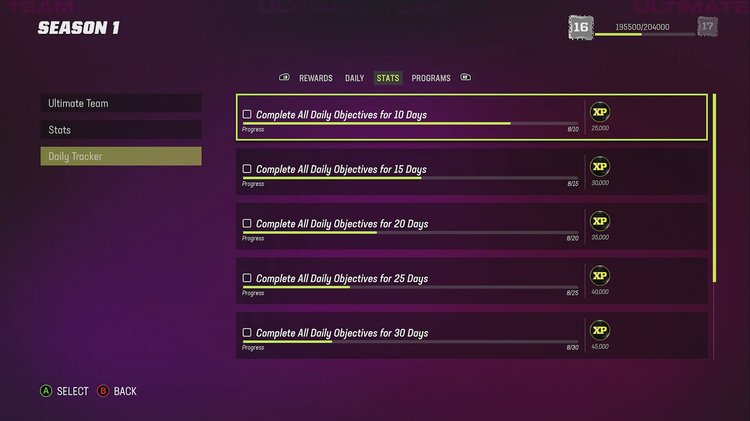 The final tab we look at within the Season 1 Field Pass is the Programs tab. This tab includes Season XP Objectives that can be earned from your other Field Passes: Competitive and each Program's Field Pass that's released during the Season. Some Program Objectives will even reward you with players from the respective program. 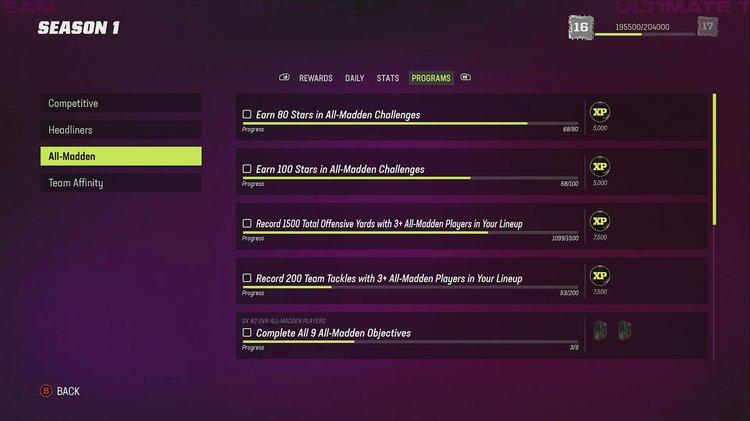 Similar to the Season 1 Field Pass, you can scroll through all of the potential rewards and view Objectives that can be completed in each game mode to earn CP and increase your Competitive Field Pass Level. While the majority of Competitive Objectives must be completed in one specific game mode, the rewards you earn by playing these modes are cumulative, meaning the CP you earn from each game mode counts toward the same reward path along the Competitive Pass. 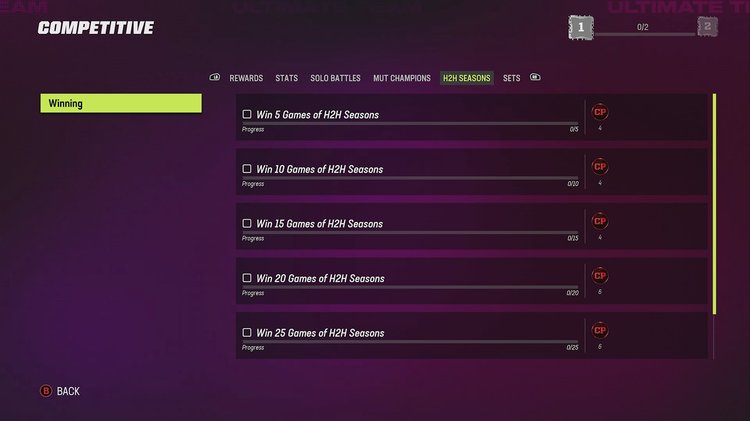 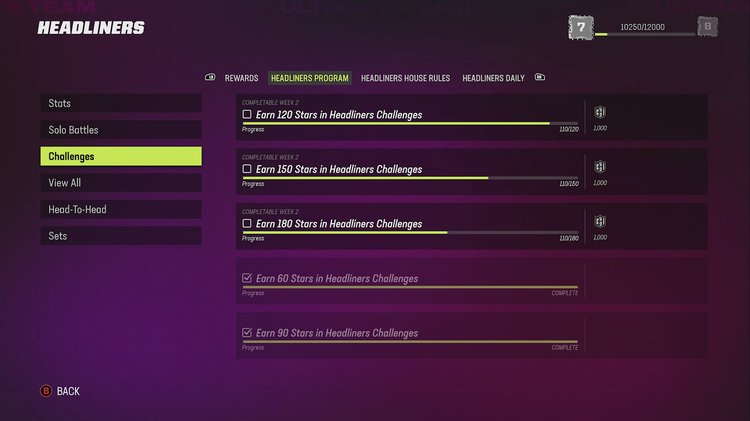 If you found today's video and article helpful, be sure to check out more content from Popular Stranger on YouTube and Twitch! How are you liking the new Field Pass system in MUT 23 so far? Share your thoughts in the comments.